The Real History of Aladdin: Everything You Need to Know

The new Aladdin live-action adaptation just hit theaters May 24 and it certainly had people talking – largely about Will Smith’s portrayal of the Genie, which some people loved and some people absolutely hated. Beyond Will Smith as a charismatic blue mass of CGI, the conversation also turned to the question of. “What is the actual history of Aladdin?” While most people know it has something to do with 1001 Arabian Nights, few know the true origins of the story. So today, we’re giving you everything that you need to know about the real story of Aladdin.

While it may shock some people, it won’t come as a surprise to most people. Disney’s 1992 animated version of Aladdin’s story was not original. Just like Sleeping Beauty, Snow White and the 7 Dwarves, Cinderella, Robin Hood, and dozens of other classic so-called Disney stories, Aladdin was not a Disney story at all.

However, the magic of Disney lies in their ability to take timeless stories like the fairytales mentioned above, and transform them into a pop culture phenomenon. Many of the stories that they use as the sources for their blockbuster movies are extremely different from the movie we end up enjoying in the theater.

Take Frozen for instance. According to CinemaBlend.com, “Frozen now stands as the second highest grossing animated movie of all time, and the biggest non-sequel animated film ever released.” Disney did that off of a story about a magic mirror (created by the devil) that breaks and gets into a little kids heart and eyes. There’s more to the original story by Hans Christian Andersen, but you get the point. Disney is the master of changing old, strange fairy tales into record breaking films that define generations.

The Disney story that we all know an love (from both the 1992 animated version and the 2019 live-action version) is basically a young street thief in the Middle East ends up with a Genie in a lamp that grants him 3 wishes. Aladdin uses those wishes to make himself a prince to he can woo princess Jasmine. However, his plans are impeded by the evil Jafar. Aladdin must defeat Jafar in order to save Jasmine and they end up living happily ever after.

Basically. However, those details vary wildly from the original story.

The Real Story of Aladdin

The original version of Aladdin’s story has him living, not in the Middle East, but in China. That right there transforms the vibe of the story altogether!

Another huge difference is that Aladdin is not a street-smart orphan just barely getting by, fending for himself, and dodging city guards. Instead, he’s a lazy kid who is a universal disappointment to his family. Kind of a big difference there too!

As you can already tell, the real history of Aladdin pokes a lot of holes in what most of us consider the “canon” story of Aladdin. But we’re just getting started.

Remember how we mentioned that many people associate Aladdin with 1001 Arabian Nights? Well, turns out that is kind of wrong too. But only kind of. You see, originally, Aladdin was not in that compilation of stories. It was added to it in the early eighteenth century by a guy named Antoine Galland. Galland was a French translator who apparently thought 1001 stories wasn’t enough. Either that or he had a couple extra stories laying around he didn’t know what to do with, so he decided to add the story of Aladdin to his translation of 1001 Arabian Nights.

So thanks for the confusion Antoine!

In the original story, the genie was not the funny, charismatic character iconically portrayed by the late, great Robin Williams, either. Instead, he was a rather hideous looking guy who was in fact, not blue at all. However, he does grant Aladdin some wishes, but not just three. That’s right, the classic “only 3 wishes, use them wisely” was not in the original story. Also, there are two genies in the original story, one less powerful and one more powerful.

Disney did get it right when they have Aladdin wish to become a prince so that he can marry a beautiful princess. However, the manner in which he did that involved him foiling the marriage that she had been planning to another man.

While some have decried Disney meddling with these classic storylines, most realize that Disney has really done the world a service. There are certainly great elements in the original story of Aladdin. However, it took the magic of Disney to pull them out and turn them into something that you want to go see in the theater.

Author Maria Hart is the content marketing manager at Comic Years. She is an enthusiast of the comic book industry, which is why she loves to share her knowledge with all fans of comics, movies, and TV shows. Her passion and love towards the industry are what make her articles stand out and gain the interest of many readers. For inquiries, you can email Maria here. 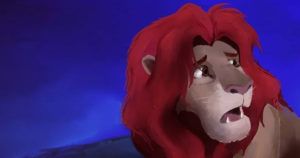 Secrets of Making the Original Animated 'The Lion King'
The Lion King is one of Disney’s most beloved animated movies for its music, themes, and ability to touch people’s hearts. The film was the 32nd Disney animated feature and ...
click here to read more
Advertisement - Continue reading below
Advertisement - Continue reading below
Share  On Facebook