After months of anticipation and social media misdirects, pop music superstar Taylor Swift has released a brand new single. The track, entitled “Look What You Made Me Do,” was released Friday. Already many on social media are dissecting the meaning of the song – which was co-written by Swift and Bleachers frontman Jack Antonoff – with many saying it’s unmistakably referencing Swift’s feud with the Kardashian-West power couple.

As anyone with an internet connection most likely knows by know, the animosity between the two camps began at the 2009 MTV Video Music Awards, when Kanye West interrupted Swift’s acceptance speech to proclaim Beyoncé should have won. The two superstars eventually let bygones by bygones and publicly made up, until West referenced Swift as a “b*tch” who he “made famous” on his 2016 track “Famous.”

Swift publicly objected to the song and its reference to her, which is when West’s wife Kim Kardashian became involved. The reality star leaked audio of a phone call between Swift and West where the former seemed to give permission for her name to be used in the song, though notably the “b*tch” line isn’t mentioned in the recording.

With that context, there seems to be some blatant references to the feud in the lyrics to “Look What You Made Me Do.” At one point, Swift sings, “I don’t like your little games; I don’t like your tilted stage. The role you made me play: of the fool,  No, I don’t like you,” likely a reference to West’s tilted and angled St. Pablo Tour stage.

In perhaps the most blatant lyrics, Swift belts, “The old Taylor can’t come to the phone right now. Why? ‘Cause she’s dead,” with her voice modulated to sound like it’s been recorded through a phone receiver.

Prior to the song’s release, there was already speculation  the feud with the West-Kardashians would be mentioned on the album due to Taylor Swift’s use of snake imagery on Instagram (Kardashian notably used the snake emoji to refer to Swift on Twitter). The speculation only intensified when Swift revealed the title of her new album as Reputation and released an image of tabloid-influenced cover art, both seemingly in reference to the very public spat and its intense media coverage.

Whether or not Swift confirms the references or not, the track – which will see its official video released at Sunday’s VMA Awards –  and the Reputation album (out November 10) will undoubtedly be huge hits for the pop star, likely giving her the last laugh after all and allow the public to put this feud business behind us…unless there’s a Katy Perry diss track of course. 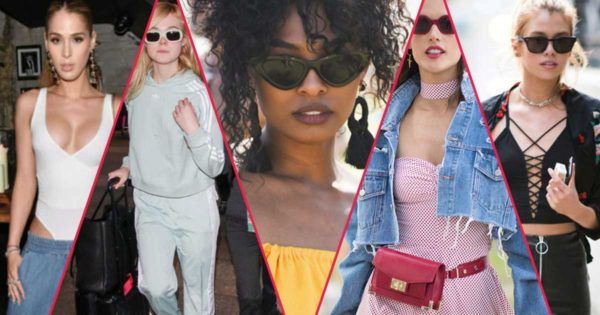 Every Single Fashion Trend You Need to Try Immediately
Feeling like you’re in a fashion rut? Be honest, how many times this week did you say, “I have nothing to wear?” Don’t fret dear friend, we’ve got your back ...
click here to read more
Advertisement - Continue reading below
Share  On Facebook