Did You Know the End of ‘Jurassic Park’ Was Changed During Filming?

The 1993 release of Steven Spielberg’s Jurassic Park was one of the most influential in movie history. The dinosaur epic smashed box office records on the way to being the highest grossing film of all time (until Titanic’s release in 1997), and launched a multibillion dollar film franchise that continues to this day. In addition, Spielberg’s use of CGI effects changed the entire summer blockbuster genre forever. However, did you know that despite its monstrous success, Jurassic Park was literally being rewritten as it was being made? In fact, the film’s ending changed several times during production.

The story of Jurassic Park’s cinematic climax began – like everything in the franchise — with Michael Crichton’s original novel. That story ended on a down note, with the surviving characters being held by Costa Rican and United States government forces in order to keep news of the dinosaurs from reaching the general public. According to reports, the novel’s ending was never considered for the film.

As Crichton and fellow screenwriter David Koepp worked on the film’s screenplay, they considered several ideas for the ending, including one revolving around the T-Rex chasing an escape helicopter. They ultimately settled on one that revolved around Alan Grant (Sam Neill) using construction equipment in the park’s visitor’s center to defeat two velociraptors — one of the raptors ends up impaled on a T-Rex skeleton, while the other is wounded and eventually shot by John Hammond — allowing the survivors to escape. See the fan-made video below, which combines footage from the film with concept art for this scene, to get an idea of how this scene would have played out.

However, as production of the film neared its completion, Spielberg began to rethink the climax. While the director wanted to retain the T-Rex skeleton to juxtapose the “living” dinosaurs with their prehistoric ancestors, he didn’t feel that the climax, as scripted, had enough action. Spielberg also realized that audiences would want to see more of the T-Rex after the show-stopping chase sequence in the middle of the film.

Spielberg and the production team reworked the ending so that it featured the T-Rex arriving at the last moment and “rescuing” the humans from the raptors. Following their escape, the T-Rex lets out an iconic King Kong roar as a banner that reads “When Dinosaurs Ruled the Earth” falls to the ground.

Spielberg’s intuition proved to be right, as the image of the triumphant dinosaur has become one of the most iconic of the film. It’s been used for merchandise, including DVD covers, posters, and statues. The scene was even referenced in the 2015 sequel, Jurassic World, as several of the film’s characters come across the banner in the long-abandoned building. 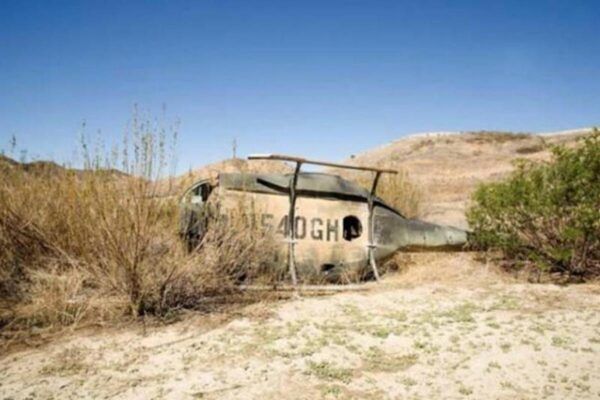 Abandoned Movie Sets that Sit Locked Frozen in Time
Film sets, but their very definition, are temporary. Even the most famous areas dressed for movies are usually torn down as soon as production concludes. That’s what makes these abandoned ...
click here to read more
Advertisement - Continue reading below
Share  On Facebook