Jennifer Lawrence is “like a daughter” to Robert De Niro.
The 25-year-old actress has a strong bond with the 72-year-old actor – with whom she has starred in ‘Silver Linings Playbook’, ‘American Hustle’ and ‘Joy’ – and knows she can always go to him for advice “on absolutely everything”, even if he does treat her like his youngest child.
Presenting him with the Excellence in Media Award at the 27th annual GLAAD Media Awards in New York City on Saturday (05.14.16), she said: “I’m like a daughter to him, and that transpired into our once-a-week drinks at the Greenwich Hotel where I get advice on absolutely everything.
“And also, he gets drunk and pinches my cheek and says, ‘You remind me of my little Helen’ . . . who is four!”
The veteran actor was honored in recognition of producing ‘Remembering the Artist, Robert De Niro Senior’, a documentary about his father, Robert De Niro, Sr., who was gay, and Jennifer wasn’t surprised that her friend received the accolade.
She added: “As one of the greatest actors who has ever lived, you can learn a lot from him.
“But the most important thing he’s taught all of us is acceptance. Bob is the kindest person I’ve ever met. His heart is so giving. And with his own quiet strength, it is no wonder that this man and the incredible organization that is GLAAD would come together tonight.
“Bob was deeply touched by his father, a wildly talented abstract expressionist painter, the late Robert De Niro Sr., a gay man who struggled with self-acceptance at a time when organizations like GLAAD were not around.
“In the HBO documentary, ‘Remembering the Artist, Robert De Niro Sr.’, he shared his father’s story with the world.”
“Bob, you are wise and you are loving and the world is truly a better place because of you.”
Accepting the prize, Robert quipped that “being a father figure” wasn’t enough in their relationship.
He joked: “Thank you, Jen. If I were a lesbian, I’d be all over you.
“Being a father figure has its limitations. Jennifer Lawrence is not only a great actress, she’s a respectful and loving friend.”
Other recipients of awards at the ceremony included Mariah Carey, who was given the Ally Award from her friend Lee Daniels, and Diane Sawyer, whose tell-all interview with the then-Bruce Jenner – who transitioned to a woman named Caitlyn shortly afterwards – on ’20/20′ scored the Outstanding TV Journalism – Newsmagazine prize, which she picked up along with her interviewee.

Outstanding Digital Journalism Article:
‘This Is What It’s Like To Be An LGBT Syrian Fleeing For Your Life’ by J. Lester Feder (Buzzfeed.com) 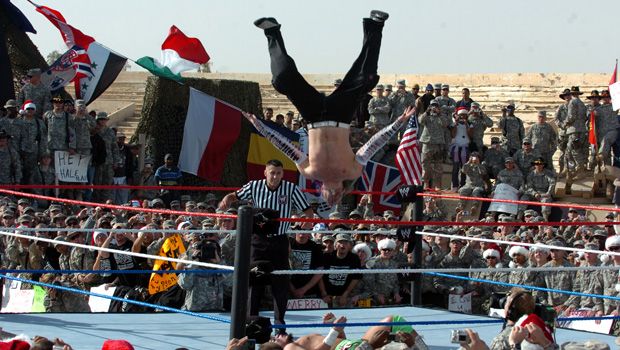 Can You Match the Finishing Move to the WWE Superstar?
How well do you think you know your WWE Superstars? From The Rock to Bo Dallas, these sport entertainers are in a class of their own. Their athleticism and energy ...
click here to read more
Advertisement - Continue reading below
Share  On Facebook