Adele wants to become a witch.

The 27-year-old singer was gifted some crystals in New York and claims they have been responsible for the success of her new tour, leading to her interest in magic.

According to The Sun, she told fans during a recent performance: “When I played a show in New York, which was my first show of the album, a hippy gave me some crystals.

“Then I had a great show so I was like, ‘It’s something to do with these crystals. I’m keeping them’.

“I kept them for my LA show, for my BBC show . . . I had them all. Then I had reflexology and someone was shining lights on my feet and I was like, ‘This is awkward’.

“But when I left I was skipping down the street like I was walking on air.

“So I’m becoming a hippy, I’m going to become a witch.”

And Adele became even more convinced of their magical properties after she left them behind for the Grammy Awards, leading to a disastrous performance due to technical difficulties.

She explained: “The one time I didn’t have them was the f***ing Grammys – spooky s**t. I believe in these crystals.” 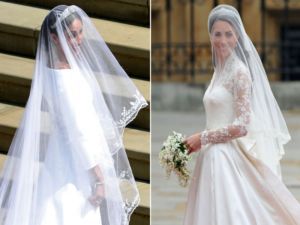 Examining the Differences Between the Royal Weddings, in Photos
In 2011 and 2018 respectively, the media was abuzz when the UK formally welcomed two new (and very different) additions to the royal family: Kate Middleton and Meghan Markle. Middleton, ...
click here to read more
Advertisement - Continue reading below
Share  On Facebook