| May 28, 2016 | By michaelwight
Advertisement - Continue reading below

The death of a loved one, especially a spouse, tends to leave you depressed and feeling helpless.  Tona Herdnon was going through the same emotional trauma when she visited the grave of her 60-year old husband who had passed away two weeks ago. Due to the sudden nature of his death, Tona was still recovering from the shock, and then she received yet another one.

As she reached the gravesite, a stranger walked up to her and robbed her of her purse, which contained $700 along with other belongings. Tona was smart enough to report the crime immediately and recognized the assailant from mug shot pictures presented to her. As a result, news of this crime spread like wildfire and it wasn’t long before Christian Lunsford saw it and realized that the mugger was no other than his estranged father, who had been in and out of jail for the past couple of years.

The father had suddenly showed up and gave Christian $250 for his school trip. Guessing that the money came from Tona’s purse, he took it upon himself to repay her. The two met at a church parking lot and though Tona accepted the money, she gave it all back so the 15-year-old could enjoy the school trip he was so looking forward to.

Watch the video of how Christian and Tona met and bounded over a simple act of kindness.

Becoming a hero to someone doesn’t really take a lot of effort. All you need is a courageous heart and the willingness to do the right thing. Once you have that, you won’t be able to miss on an opportunity to show kindness. 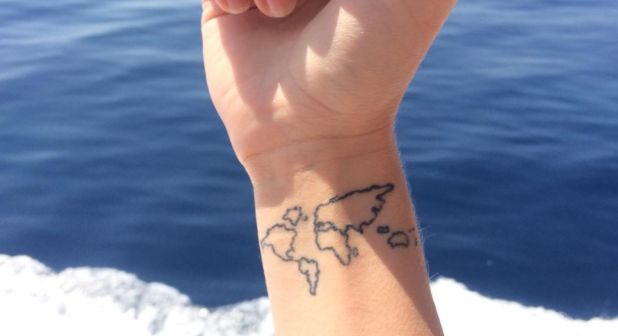 22 of the Coolest Minimalist Tattoos
Nothing lasts forever! Except tattoos. Well, you can have them removed. But it will hurt. Anyways – The past few years have brought about a new trend in lifestyle and ...
click here to read more
Advertisement - Continue reading below
Share  On Facebook