We live in an overly connected age, and it isn’t lost on children. Kids these days want to watch TV, chat with friends on their mobile phones and tablets, play mobile and console video games, and they even watch TV on their mobile gadgets.

One DIY dad was struggling with how to grab his children’s attention while getting them to read more books.

Instead of taking things into his own hands, he asked his children to help design their own bookshelf. What they came up with together is color, creative, and a ton of fun.

This was a truly barebones project. This DIY dad started with some bendable plywood and his own artistic capabilities.

His kids wanted a rainbow with a nice comfy place to sit at the bottom of the rainbow. We hadn’t seen a bookshelf with a built in sitting area so we were immediately interested in his project.

Dad got to work by cutting the plywood into the pieces that would ultimately shape the rainbow bookshelf.

Dad needed to cut several of the exact same measurements so the rainbow effect would work.

He must have some experience with woodworking and power tools because his cuts were perfect.

The squares you see with each rainbow arch were used for the base of the bookshelf.

The DIY dad then had to cut matching holes in each board so they could be attached for the final stages of the build.

He drilled half-inch holes to make room for dowel rods. The dowel rods were used to steady each shelf.

He drilled holes 15-inches apart which would leave plenty of room for shelving.

Instead of wooden shelves, this creative dad decided to use a sturdy fabric by weaving strips of cloth in and out of the dowel rods. This added a new approach to the shelves and gave them an “airy” feel to match the cloud.

The white cloth was plain so he decided to add in a bunch of colors we find in rainbows. It was a smart move that added a fun look to the rainbow.

The tie-dye job created a really fun and whimsical look:

The inside of the arches were painted a solid yellow which compliments the rest of the bright colors.

The fabric was weaved around the doweling rods once it finished drying.

The platform really started to come together and the rainbow took shape at this point and something special was taking form.

The rainbow finally took form and the DIY dad added a giant fluffy pillow at the bottom of the rainbow. It’s the perfect compliment to the bookshelf and unlike anything we have ever seen.

It’s whimsical but still functional and that’s not always easy to pull off when building items for the home.

After finishing the project, this dad reflected back on the entire build. He said his kids were involved the entire time and they loved watching their new bookshelf come to life.

The kids are now regularly spotted sitting under their very own reading rainbow.

Anytime we can disconnect our children from electronics and get them excited about picking up a book and reading their favorite adventures, that’s a big win in our book. 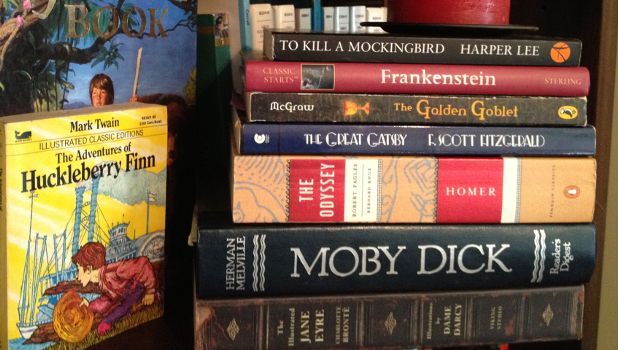 Can You Guess Which Books These Famous Quotes Are From?
“Good friends, good books, and a sleepy conscience: This is the ideal life,” said Mark Twain. But he totally forgot about good scores on internet quizzes! If you like to ...
click here to read more
Advertisement - Continue reading below
Share  On Facebook